All about Wat Rong Khun

When I said I am going to Chiang Rai, everyone told me that I must visit the White Temple aka Wat Rong Khun as it is known for its stunning all-white exteriors.. Hence, I booked a private car from KKday to pick me up from my accomodation, Spinomad in one of the morning at 8.30am.

After a 20 mins ride which is about 13 kilometers south of Chiang Rai City, I was dropped in the carpark at the rear of Wat Rong Khun before I headed in to explore the place. Mind you, the compound is huge. Once I entered, I saw a man-made water feature which is still partially under construction! Over here, there are many animated figurines such as ninja turtles and even a pig like figurines with 3 eyes. Oh yes, remember to ring the bell as it is believed that ringing the bell would evoke wisdom and good luck.

As I walked further in to the left, there is a buddha as well as a tentage that one can get a silver amplet to write their wishes and hang for good luck.

Of cos, that is not the focus for the day. Hence, I walked straight in to the ticketing counter and purchase the entrance ticket to this famous beautiful white temple that everyone is talking about. The ticket cost $50 baht across the board be it for the locals or the foreigners to enter Wat Rong Khun.

As you walked in, you will see the beautiful Wat Rong Khun (วัดร่องขุ่น) aka the White Temple. This temple is actually designed, constructed and privately-owned by Chalermchai Kositpipat, a famous Thai visual artist who is known for his controversial yet artistic use of Buddhist imagery mixed with contemporary images. It was opened to visitors in 1997 and has since gained a lot of attention for its intrigued details.

To get to the white temple, one can only enter from the front via the narrow bridge named the bridge of “the cycle of rebirth”. This is Mr Chalermchai Kositpipat’s interpretation of hell where one would see a pool of stretching hands which signifies the suffering souls in hell, the cycle of death and how one can be rebirth onto the way of happiness by overcoming the worldly desires of men such as temptations, greed and fame.

Do note that it is an one way walking passway in Wat Rong Khun. So if you want to take picture, always wait for your turn and walk through the place slowly. Once you pass the pathway guarded by guarded over by the two half-human, half-bird status, aka the Kinnaree from Buddhist mythology, you will be to ascend toward ‘heaven’.

At the end of the bridge, it is where the principal building aka the ubosot is. One can spot several Buddha images in meditation around this all-white building embedded with fragments of mirrored glass around the building’s exterior. Once you enter the ubosot, there are no photography allow. But do spend a few moment here as the decor are rather interesting as one would see Michael Jackson, Harry Potter, Superman, and even Hello Kitty.

Of cos, once you are out of the ubosot, there are also many picture worthy places around Wat Khun Rong premise.

There are several buildings around the white temple compound. Besides the golden building which is the toilet, near the bathroom, there is a museum as well as small Art Gallery. All in all, I spent 1.5 hrs here, waiting for my turn to take pictures as well as to explore the compound. Although Wat Rong Khun can be reached by a blue songthaew at the old bus station with a fare of about 300 Baht, I feel that getting a 1 Day Charter Tour from KKday is better as you can explore more places without wasting any time waiting for the transport or haggling the price. The only downside is the tour starts from Chiang Mai and you got to top up the petrol which cost about $700 baht. So if you are thinking of checking some places of interests in Chiang Rai while going on a holiday in Chiang Mai with a couple of friends, this arrangement is perfect. 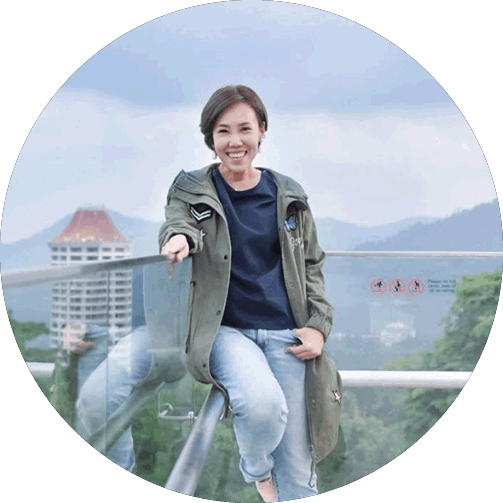 Mshannahchia started as a personal site to document food hunting experiences. However, over the years, it has evolved into a website where a team of us share our love for travel, photography, beauty, food and lifestyle. We believe that good things are meant to be shared, so are bad experiences. Hence, this is a medium for us to be connected to the world with our passion for sharing.

Quote " Hannah" to enjoy 20% off all nail art services